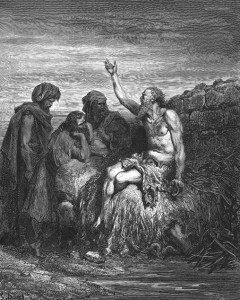 In the next few posts, I want to address the reality of suffering in the life of the Christian.

Much of this is due to the fact that this teaching has, as a foundational base, the false belief that all suffering is due to the lack of faith of the Christian. That is one of the reasons for this post, but the second, and more important to me, is the fact that, as a church, Covenant Fellowship has recently been going through quite a time, with sickness, death and loss of jobs happening in rapid succession; therefore, I thought that it might be helpful to examine God’s providence in all stages of life, providing comfort and confidence in the great Hope found in our God!

So, before we go any further, let’s examine what God’s Providence is NOT.

1. God’s providence is not based upon the song – Que Sera Sera — with the repeating refrain of ‘whatever will be, will be’. This makes God’s Providence a blind, unknown, unfeeling force which causes things to happen. The atheist would be in total agreement with this mindset – the ‘forces of nature’ are driving the boat, a chance interaction of atoms, molecules etc. Suffering to this mindset is simply the happenstance of fate, not the guiding and governing of God.

2. Nor is suffering and providence simply the karmic outplay of events. Some think (as did Job’s friends) that God’s providential care is karmic in its outworking. Christians sound more like Hindus when they say things like, “That person got what was coming to them”, as if God’s providential plan is somehow working out the karmic balance of the Universe. Truth be told, if we got what was coming to us, we would all be in the same boat. No, God’s providential care is not a Christian balancing of the karmic forces. We see this refuted in the pleas of the psalmist as he sees the evil prosper and the good die, or suffer.

3. Then you have those who see suffering as an illusion – that it is not God’s providential plan that is being played out, but that we simply must understand that pain and suffering are illusory. This mentality sounds noble and lofty in many ways, but is unworkable in the real world. Buddhism and Christian Science promote this mentality. When suffering and tragedy strike, regardless of your belief in the illusory qualities of suffering, it still occurs.

A good working definition of God’s Providence is “God’s works of providence are, his most holy, wise, and powerful preserving and governing all his creatures, and all their actions.” (1) God’s providential care is not capricious, or arbitrary, but performed according to His most holy plan. His providential care is also not karmic or illusory. And we will see that this matters when it comes to the subject of suffering. We are not simply puppets in the hand of God, but are His beloved children, who are under His constant guidance, and loving care.

SECRET WILL vs. REVEALED WILL

As regards God’s providential care, we will find that there are two aspects of it that need to be addressed. First, in Deuteronomy 29:29 we read — “The secret things belong to the LORD our God, but the things that are revealed belong to us and to our children forever, that we may do all the words of this law.” This passage clearly states that there are aspects of God’s Will that are hidden from mankind, and there are aspects of His Will which are revealed to us – these are found in His word; much to the chagrin of many modern day so-called prophets who claim to have some secret extra-biblical ‘word’ revealed only to them.

Why is it important to understand these aspects of God’s Will? Simply put – we will not know nor understand everything that occurs in this world, as some things reside exclusively in the realm of God’s hidden will. And frankly, quite often suffering falls within this realm.

Now, first let us look at suffering as regards the revealed will of God. Some suffering results directly from our fallenness; i.e. a person suffers the ravages of drunkenness or drug addiction – in the Word, God warns of the damage of drunkenness – and man, fallen and self-centered, will ofttimes suffer from the ravages of a self-imposed disease. Or maybe one runs with a rough crowd, and suffers beatings and/or worse. God clearly warns about running with a bad crowd. You see, some suffering is simply caused by our self-focused decisions, decisions which all fallen man is susceptible to; there is nothing secret about why these things occur.

Viewing the big picture, we all suffer from the decision of our father, Adam. When Adam fell, we all fell, and therefore we are all now heirs to the inheritance of Adam’s fall – i.e. sin, sickness and death. So, all suffering is rooted and grounded in a known cause, sin, at the end of the day. The best, most noble, most Godly people in the world get sick, and die for the same reason that everyone else does, this is the legacy of Adam, whose sin and rebellion brought sickness and death into the world. We know this because, as it stated in Romans 5:14 – “Therefore, just as sin came into the world through one man, and death through sin, and so death spread to all men because all sinned…” 1st Corinthians 15:56 – “The sting of death is sin, and the power of sin is the law.”

However, with that being said – we often struggle with the suffering in our life, or the lives of our loved ones, when the cause of the suffering is rooted in God’s secret will. When I lost my daughter at 18 months, I could not figure that one out. When a godly person is lost before their time (in our eyes), we often ask God “WHY??”

Robert Murray M’Cheyne, an amazing man of God died at the ripe old age of 29 years old. David Brainerd, the missionary to the Native Americans, suffered with TB most of his life before it took him at 29. And we can only ask “WHY?” However, if we trust in a loving and caring God, while we may not understand the why of it, we can trust that God’s loving care was in it.

When Huaorani warriors martyred Jim Elliot in an Ecuadorian jungle at the age of 29, it would seem to us to be a gross miscarriage of justice, or worse, a mishandling of the events by God. After all, Jim was down in Ecuador attempting to minister to those people.

If that were your view, you would have to read, as Paul Harvey put it, the rest of the story. Elizabeth, Jim’s wife, and a group of missionaries continued his work in Ecuador, and many people in the Auca tribe came to know Christ, and some of the very same warriors who had killed Jim and his friends, became elders in the local church there. To God be the glory – Jim Elliot understood this better than many people, as he said when writing of missions work being more important than life – “He is no fool who gives what he cannot keep to gain that which he cannot lose.”

What of Joseph’s suffering? He suffered greatly at the hands of his brothers, his master, and friends, yet at the end of the day, it all worked out for God’s glory and the salvation of God’s people Israel. What about Naomi, Ruth’s mother-in-law? She suffered the loss of her husband and both sons, forcing her to return, with Ruth, to Israel from Moab. Did God have a plan for this woman, who insisted on being called Marah (bitter)? Well, let’s see – Naomi was forced to return to Israel, where Ruth met Boaz, they wed, Ruth had a son, named Obed – who had a son named Jesse – who had a son named David, through whom the Messiah came!

My friends, we all too often want an answer for all suffering, but truth be told, some things are simply hidden within God, but we can trust that His love and care guide us every step of the way as we go through the trials of this life. The so-called healers that claim all sickness stems from a lack of faith simply do not understand or appreciate God’s holy, perfect and wise providential plan for His children. Sometimes our suffering is a mystery. I will continue this line of thought in my next post…